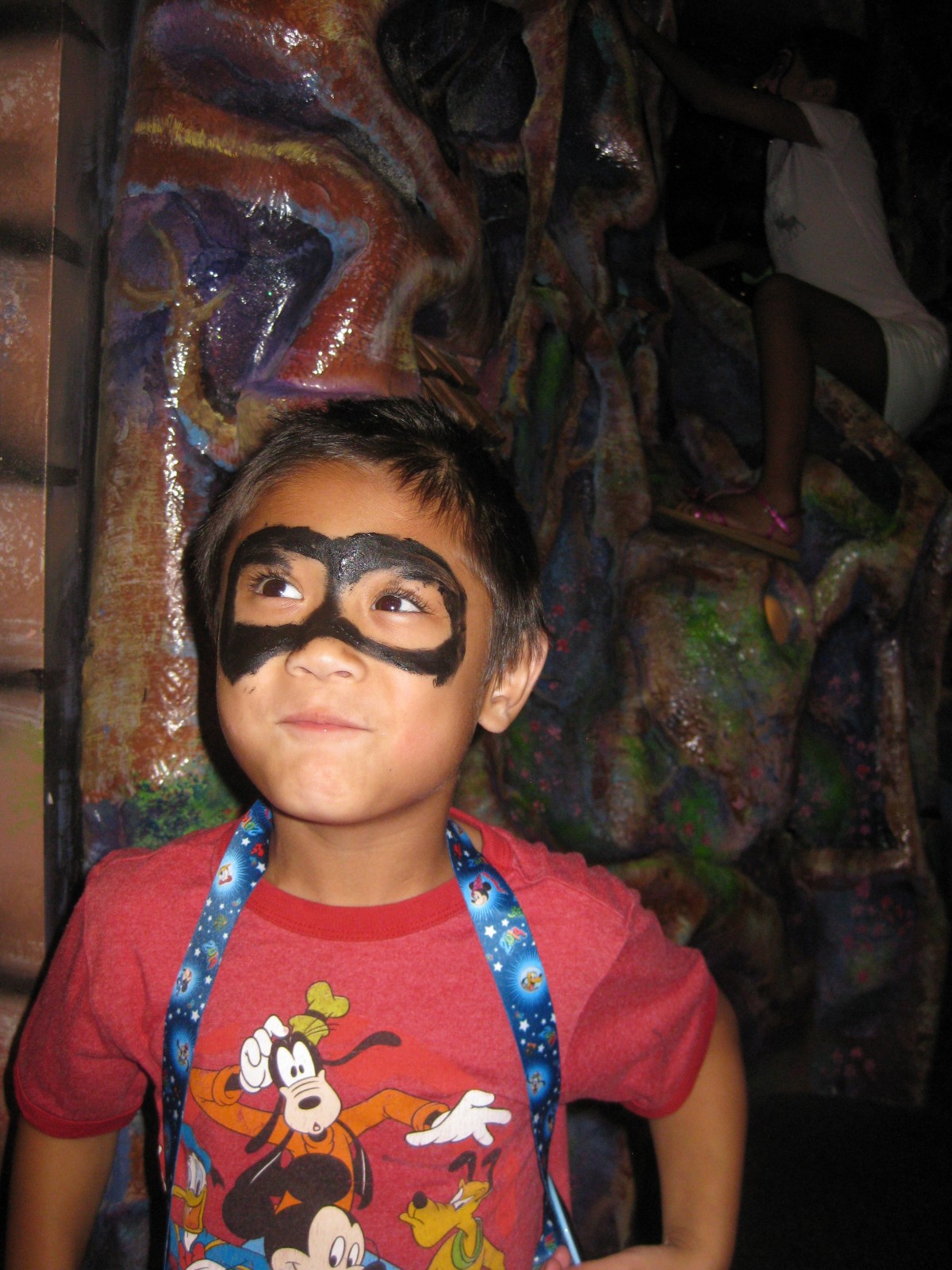 For the first time in a long time, Patrick slept the whole night in his bed without mommy while traveling.  I think I can say we were all very tired after yesterday.

We started off the day introducing Patrick to a jetted tub.  He wasn’t so sure about it until dad came into the room, and then he had to show off so he splashed, and kicked water everywhere, which made the jets ok.

We got everything together, someday we will blog about what it takes to get Patrick out the door.  I’ll just say that it is a process that takes a lot of time, and preparation, and usually a few moments of “what about this” to be figured out.

Give Kids The World (GKTW) has characters come to the resort during the week.  Today Goofy, Mary Poppins, and Mickey were at the resort to meet the kiddos, and take pictures.  We were also instructed that if we brought the stuffed Mickey, we would be able to get it signed by Mickey.  We met Goofy first, and he decided that he would sign it as well, which was fine by us.  After the fact Patrick decided it was naughty, which makes us smile.  Patrick liked meeting the characters, and having a little more time to spend with them than in the parks.  We had a nice chat with Mary Poppins, if you ever get the chance to meet her in one of the Disney parks, take it.

We set out for Disney World.  I missed the turn for handicap parking, so we had to go around.  Once we got parked we headed towards the park, only to meet a long line for the ferry.  We got to wait for two ferries, and finally made it on.  After we got off the ferry, we got to wait in yet another line to go through security (that was a large crowd trying to get through).  Then yet another line to actually enter the park.  At this point, I don’t think any of us were in a very magical spirit.  We had to stop and get a sticker that identified Patrick’s stroller as a wheel chair, which was another line.  However this line was different, one of the cast members noticed Patricks GKTW button and took special care of us, which was appreciated.

After roughly 2.5 hours since leaving GKTW we were finally ready to see the park.  Not intending to complain here, just remembering how the day went.

Patrick loves autopia in Disney Land, so we headed to the “Tomorrowland Speedway” (i.e. Autopia) for the first ride.  We presented our special access pass, and hopped on the ride.  Patrick did his normal, lets not steer so we bump as hard as we can into the guide rail (thanks Emily for being willing to take the abuse of these maneuvers.)

We wandered around taking in the park riding a few rides.  Patrick wanted to meet Donald Duck, so we headed to where he spends his days.  A cast member saw his button, and said follow me, he lead us through a store, and into a back hallway.  Next thing we knew we were standing next to Goofy and Donald, he had taken us to the front of the line through the exit.  Minnie and Daisy were across the room, and they also took over to meet them.  Patrick was super excited to have met Donald (even remembered it in our prayer tonight).  We had a similar experience meeting Tigger and Pooh Bear.

We snagged some lunch.  I had mac and cheese with pot roast on top of it – don’t knock it until you have tried it.  The only problem with it was that it was hot, and the day was quite hot as well.  Patrick was starting to zone out, so we decided we would checkout the Wish Lounge.  This is a room in the first aid building set aside for wish kids to take a break, and gives them a place to take care of medical needs.  We knew that hopes of getting Patrick to nap were very low, but a rest would do him good.  I set a timer, and he laid with us on a big pillow until the timer rang.  He almost fell asleep a few times, but resisted it well.

We caught a few more rides, and then it started raining.  At first I was smiling at all the people that were hiding under any cover they could find.  It sprinkled for about 20 mins, and then the rain hit.  We were drenched, and Patrick wasn’t so happy about it (he really doesn’t like having rain or snow on his face.)

Because of the rain many of the rides were closed, so we went and met Mickey again. This Mickey was different in that he talked.  Patrick wasn’t so into Mickey coaching him to fly like Peter Pan, but he was super impressed that Mickey could talk.  Tinker Bell was in the same building, so we took the time to meet her as well.  She spent a long time talking to Patrick, he didn’t really catch what she was saying, but enjoyed meeting her anyway.

We rode It’s A Small World one more time.  That ranks as a close second for favorite rides.  (And in Patrick’s opinion the one in Disney Land is better).  It was time to go.  We caught the monorail back to parking (much faster than the ferry).

We got back to GKTW and got ready for dinner.  We called a train to come pick us up (a fun way to get around the resort).  We went out on our porch and waited.  Patrick took my camera and started taking pictures, mainly of our car (See the photo gallery, I’ll include a few).

We had dinner then it was time for Halloween.  GKTW has Halloween and Christmas every week.  Since it was raining Halloween was inside which made it a little cramped, but fun none the less.  Patrick ran around the room getting candy full of all kinds of things he is allergic to, but thats ok, he was having fun collecting candy.  We then got his face painted.  When we got done with that the party was a little too overwhelming for him, so we headed out to see what else we could find to do.

As we were walking Patrick rubbed his face, and got face paint in his eye.  We detoured to the nearest rest room, to try to get his face paint off.  When we finished he looked kinda like a zombie.

After wandering a bit more, we stopped in for ice cream.  GKTW has soy and rice ice cream, both are safe for Patrick.  We decided we would try to get him to eat rice milk ice cream.  The only problem was that Patrick will only eat while bread this week.  He wouldn’t go near the ice cream.  After we forced him to eat a bit, he said it was good, but still wouldn’t eat it.

We made it back to our room, and did the evening preparations for Patrick (almost as much as morning preparations).  Emily got Patrick to sleep while I talked to some family to make plans for the end of the week.

Today was a fun day.  As Patrick was going to sleep, he was no longer Boots (from Dora the Explorer), he was now Mickey, Emily is Pluto and Minnie, I am Goofy.  We’ll see how long his name will be Mickey, but that means today was a very big day for Patrick.  His wishes truly were granted today.

We are so thankful for all that do so much for Patrick.  The volunteers here at GKTW, and the countless people that help us so much back at home.

By the time I sleep I will have taken 25,000 steps according to my fitbit.  That is roughly 12 miles walked today, it is time for bed.

PS – Sorry for the rambling of this post, I’m trying to record memories that we can reflect on.

We have taken some pictures, but all of the pictures taken with the characters will come at the end of the trip.  Here are some pictures from our cameras taken today: