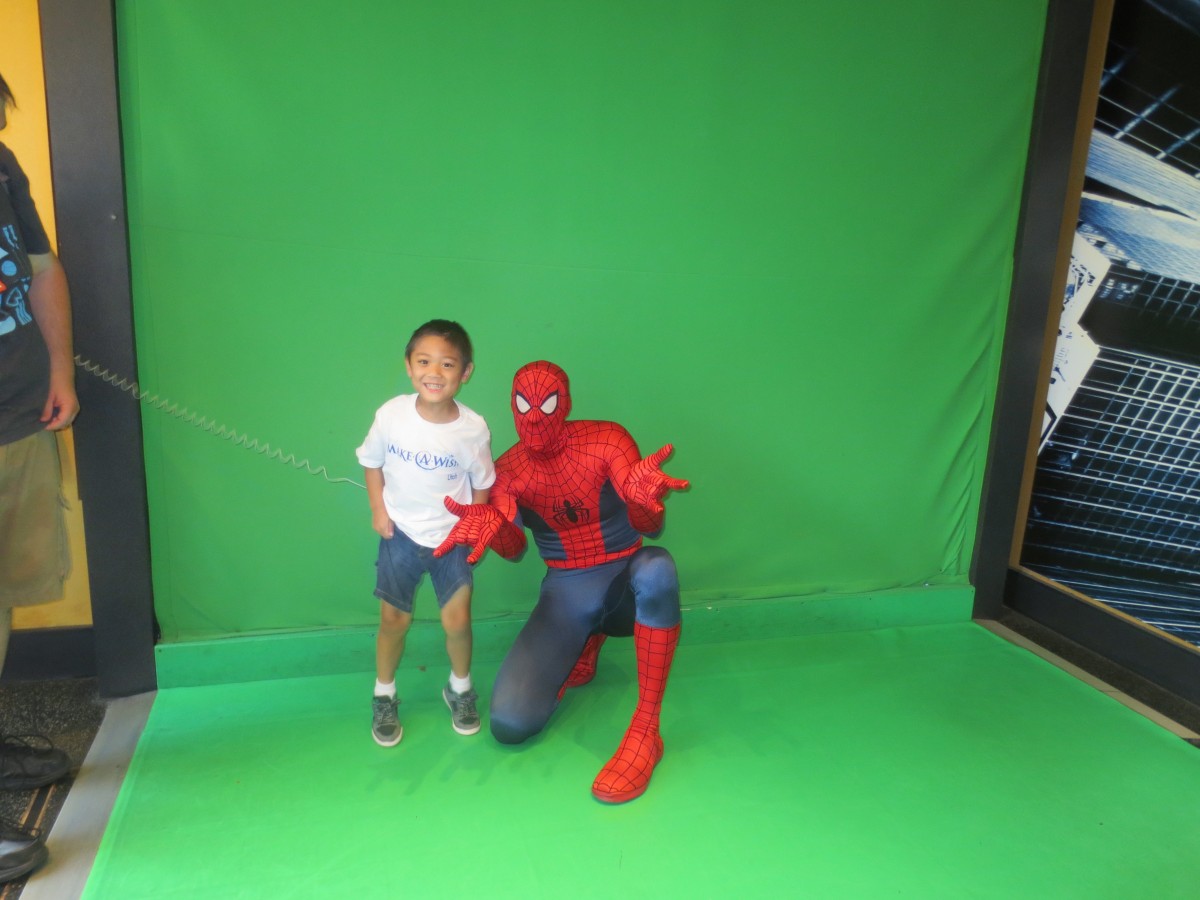 Is this really only day 3?  Seems like we have been at this for a long while.

Today we did our normal morning routine (mommy ended up spending the last few hours of the night helping Patrick sleep), and set off for Universal Studios.

I yet again had trouble spotting the handicap parking instructions.  This time it was easy enough to fix.  However both parks have a blue line painted on the road to guide you to the correct place.  Why I can’t follow that I’m not really sure.  Oh well, that is a side note.

Getting into Universal Studios was fairly easy, crowds were fairly light.

We decided that we would head to the back of Islands of Adventures and start at the Harry Potter world which included Hogwarts, and Hogsmead.  There was a kids roller coaster there that Patrick really liked.  I rode the Adventures of Harry Potter ride which was fun to see, but was a bit much for so early in the morning.  We wandered around a bit.  Emily and I read the Harry Potter series of books in preparation for this visit.  Patrick didn’t really care, but it was fun to see.  We tried out the Butter Beer, which was pretty good.  We watched a wand pick its wizard, which almost held Patricks attention.

We decided we would head to lunch.  En route to that there was a guy in the middle of the walkway holding a “Meet Spiderman” sign.  Patrick is currently big into superheros, so we decided we would stop.  That was a good choice (see the pics at the bottom), Spiderman had a good chat with Patrick.  He also pointed us to where Captain America (Patricks current favorite) was.  When we got to Captain America he had to go, so we barely missed him.

We stopped in for lunch, Patrick was fairly grumpy because he was tired.  After lunch we headed back to where Captain America was supposed to be, on the way we were stopped so all the super heros could ride there motorcycles to wherever they go.  Missed Captain America yet again.

We wandered through the park looking for rides for Patrick.  It started raining.  Today we were prepared with umbrellas for Patrick and Emily.  We ended up back in Hogsmead and decided that we would take the Hogwarts Express to the other park and see what things were like there.

Hogwarts Express was a fun ride.  We had a cabin to ourselves because Patrick was in a wheelchair.  Reminded me of a newer version of an Italian train, which I think is what they were after.

We checked out the newest part of the Harry Potter world which was diagon-alley.  It was done very well.  Outside diagon-alley was the Knight Bus, which Patrick refused to go near the wheels because they were scary.  Patrick has a phobia of some wheels.

We headed down to Minion Mahem, which Patrick says he liked, but I’m pretty sure he didn’t.

We took a break and took Patricks tubes off, and decided that we were tired.  So we headed back to our car, and drove back to Give Kids The World (GKTW).  It poured rain on use as we drove back.

We all took a good nap.  When my alarm went off I didn’t want to get up, but I did.  When Emily tried to wake Patrick he wouldn’t get up, so we let him sleep a little longer.  We got his TPN ready, and got ready for a special guest that would be arriving at bed time.

We finally coaxed Patrick to get up, and headed to dinner.  Patrick isn’t eating much this week, which meant he got bored quickly.

Tonights activity was Mayor Clayton’s birthday party.  Patrick had a great time at the party.

We also too a few minutes tonight for Patrick to turn in his start to be put on the ceiling of the  Castle of Miracles.  Patrick also picked up his pillow, which was grown on the pillow tree by a magical owl (makes sense to me because I was there).

We headed back to our villa to get Patrick ready for bed and ready for our special guest.

At a little after 9:00 there was a knock at the door.  Mayor Clayton came to tuck Patrick into bed.  Patrick hoped into bed, and Mayor Clayton tucked him in and gave him a good night kiss.  Patrick thought this was great.  As Emily was putting him to sleep Patrick asked if Mayor Clayton would come in the morning and help him take a bath.

Today was a fun day.  Tomorrow the plan is to go back to Universal Studios.  Emily is currently researching what we missed today.

We took a lot more pictures today.  Here are a few.