WARNING: THIS POST INCLUDES DETAILS OF PATRICK’S CARDIAC ARREST AND SUBSEQUENT PROBLEMS IN THE ICU, INCLUDING PICTURES.

I’ve been asked to explain several times the events of this week. I’ve decided it’s probably easiest if I just take some time to sit down and write this in a blog. It will save frequent emotional repetitions for me… preserve some of the last week while it’s still fresh in my mind… and hopefully give some answers for those who are wondering how things got to where they are. These are things that are still hard for me to remember and talk about so please don’t be hurt if I don’t want to talk more about what I’m posting in this entry.

In my last post, I wrote about a yeast infection called candida that Patrick had in his central line and in his blood. He was hospitalized for 11 days in June for that infection and then went home on antifungal medications. On July 5th his fever returned and we came back to the hospital to learn that the infection had grown back again.

In order to treat the persistent infection, they decided to return to giving him a very dangerous medication called amphotericin (a.k.a. “ampho-terrible”). He was on a very high dose but seemed to be doing ok. He always got chills while it was being given and wanted to be held and held very still, but all other signs pointed towards it doing it’s job without too much problem.

On the 15th, we were making plans to go home. We would give 3 more weeks of treatment at home to make sure the infection didn’t come back. However, before we went home, we decided to try giving the medication the same way he’d get it there. This meant shutting off his TPN (IV nutrition) for a few hours while the medicine was being administered.

He’d been doing so well that I ran home to shower and take care of a few things right before they were supposed to start the ampho. I got back an hour into it and he just didn’t seem to be tolerating it well. His hands were as cold as ice, despite several blankets and heatpacks. He was pretty restless. We tried to feed him to comfort him, but that just make him sicker.

About 3:30 p.m. he got really agitated and started to squirm and pull at his ears and cry. Then he just went limp. I called his nurse in and she called in one of the charge nurses. They took him from me and started administering CPR.

They also hit a button on the wall that pages for a “Code Blue” on the PA system. In under a minute the room was filled with people. A PCT who had cared for Patrick before came immediately to my side, as did a social worker and they stayed with me until we were delivered into the hands of another social worker in the PICU.

One doctor took charge of calling out orders while another kept track of everything that had been done. There were at least 10 people bedside helping with CPR, medications, watching vitals and I don’t know what else.

After about 15 minutes (a.k.a. an eternity) they finally revived him and they took Patrick straight to the Pediatric ICU. I followed with the social workers and his nurses in another elevator.

On the way up I finally got a hold of Brian and told him to come up and where to find us.

Normally parents are taken to a waiting room, but they knew us and how involved we are with Patrick’s care so they let us stay and watch as they placed an arterial line to monitor his blood pressure and worked to find out what happened.

The best guess is that his weakened little body was hit with a few things at once. Being off his TPN caused his blood sugar to drop. At the same time, his weakened kidneys weren’t processing potassium in the right way. When those two things hit at the same time, it created a sort of perfect storm that caused him to seize and caused his heart to stop.The next day they worked madly to stabilize him. His organs had been starved for oxygen for long enough that they’d forgotten how to work. His blood sugar was all over the charts. His potassium levels were out of control. He was anemic and his platelet count just kept dropping. His nurse that day didn’t sit down for the entire 12 hour shift.

Over the next few days things started to stabilize but there were a lot of things out of whack still. His spleen, which had already been in bad shape because of his cholestasis (liver damage) and prolonged infection, decided to protect itself by sequestering all the platelets that went through it. As a result, although they were giving multiple transfusions, his platelet count was still low and he was bleeding easily from anywhere that could bleed. His kidneys also had kind of shut down and so all of the extra fluids being poured in to give transfusions and electolytes and medicines weren’t being cleared by his body. Instead they were soaking through the veins and collecting in the other tissues of his body. 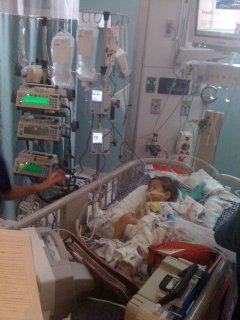 To top it all off, he had some bacteria “leak” from his gut and get into his bloodstream causing a bacterial blood infection.

Saturday they tried to extubate him, but by Sunday morning it was pretty obvious that he was having trouble breathing. X-rays showed that the fluid in his tissues had made it’s way into his lungs. And so they had to put him back on the ventilator and started to give him medicines to make his body shed the extra fluid. 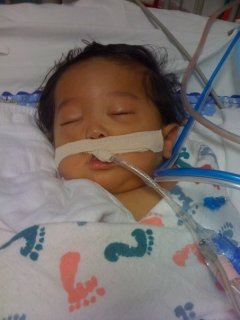 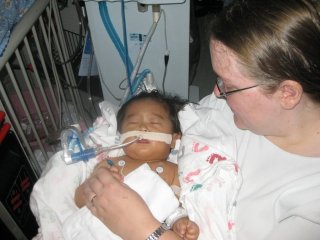 We watched and prayed and waited and tried to get ready to say goodbye until Wednesday when something amazing happened. Patrick peeked at me through heavy eyelids and seemed to know that I was there… He started reaching with his hands and so I gave him a rattle… and he shook it! The next day I was actually able to get him to laugh!

As the day went on, he woke up little by little and started to play peek-a-boo and smile and hold toys. His X-rays and labwork improved. As he woke up, they started to wean him slowly off the ventilator and off the sedatives. 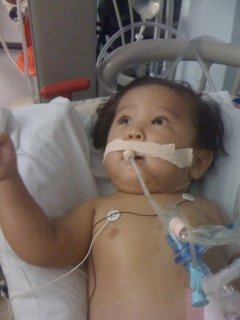 His throat was very swollen and we weren’t sure if the airway would stay open without the tube in. But Friday evening they decided the only way to know would be to try. So they took him off the ventilator and put him on high flow oxygen. And he was the happiest kid you could imagine. 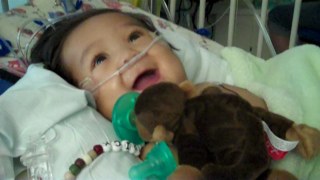 Without the breathing tube to bother him, they were able to turn off his sedatives and we became aware of what might be another problem. We noticed as Patrick started waking up that he wasn’t focusing his eyes well… staring off into space and not always following what’s going on in the room. He’s also been holding his head and arms very still. When these issues didn’t go away when the sedatives started wearing off, we became more concerned.

Neuro came to see him and said that they think there is reason to evaluate him. He will have an MRI on Monday as well as a neurodevelopmental workup. There is a possibility, especially considering how long he was down, that Patrick’s brain was damaged. Neuro will be able to help us see if that is true… and if it is, they’ll help us do all we can to help him do the best that he can.

Regardless of how weak his body is, though… the spirit inside of it is still Patrick’s. His eyes still sparkles and he loves to play and laugh with us. It has been a gift to be able to hold him and play with him again… to know he knows us and loves us still. It breaks our hearts to see that magnificent spirit confined by such a weak little body and we hope that those limitations will be brief.

As far as long term planning- Patrick will need to stay in the ICU until he is better able to breathe on his own. He is doing it right now, but he is working very hard at it. He’s on hold for transplant until he can go back to Seattle for another evaluation. At the very least, he will probably now need a liver transplant along with the small bowel transplant. We won’t know if he’s still healthy enough for transplant, though, until he is evaluated again. We’ll continue working with the doctors and therapists and nurses here to help Patrick regain as much as he can. And the rest we’ll leave in the Lord’s hands.

We’ve always known that there was a plan for Patrick’s life. We’re just humbled to get to be the parents in that plan. We trust Heavenly Father to take care of the rest.