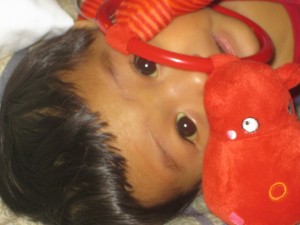 Monday morning I woke up at around 6 a.m. to try to get everything packed and ready for a day at the hospital. Our first appointment of the morning was at 9 a.m. and we needed to arrive early enough to check in and find our way around.Our transplant nurse, Sandy Mitchell, met us in the “Whale” (outpatient) wing of Seattle Children’s Hospital. We had to stop and get badges at a security desk at the entrance identifying us as Patrick’s parents. Then we went to a registration desk in the middle of the main floor and they got us checked in. They gave us a “purple pass” to use to check in for the rest of our clinic visits that day so we wouldn’t have to wait in line again to check in, and then gave us a pager and sent us off to the cardiology waiting area. 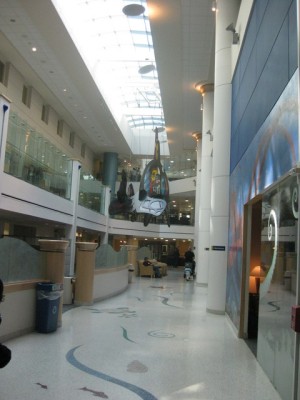 Patrick’s first appointment was for an EKG. They stuck probes all over his chest… so many that you could barely find a patch of visible skin and then in just a few minutes had a printout of the electrical readings of his heart. The funniest thing about all this is that we did it all with him still in his stroller. Hooray for whoever at Carter’s thought up the snap front bodysuit. Best hospital clothes every dreamed up for a baby!

Next Patrick had an echocardiogram. This is an ultrasound of his heart and it took about an hour to do. We undressed him this time and I laid on the table with him and kept him calm and entertained. Between Baby Einsteins on the TV and the cool black and white images on the monitor, though, he didn’t need my attention much. Funny the opportunities that life presents you, though. I finally got the chance to see my baby’s heartbeat on ultrasound!

After lunch, we headed upstairs and met with the nutritionist for the intestinal transplant program. She looked over Patrick’s most recent lab results, his output history, and his current diet and then she made suggestions, which I’ll be blogging about in a future post. It was great to hear he say that she was happy with how Patrick’s care is being managed and that she fully trusts our dieticians here.

Our next appointment was probably the most brutal of the day. We spent 2 hours with the transplant coordinator and she went over all aspects of the transplant. She explained what they’re looking for in a transplant patient and how the approval process works. (Basically, after the workup the transplant team meets together and decides if Patrick is a good candidate for transplant and if they’re willing to list him, or if there might be other things they can do to care for him w/o a transplant). Then she explained that Patrick, if accepted, would be followed closely by the team in Seattle and would probably make regular visits back to Seattle pre-transplant so they can monitor his care.

She explained a bit about what to expect when an organ became available. We learned that he will have 6-8 hours max to get to Seattle once we get a call saying that there is a donor organ. He’ll need to be healthy at the time, of course. The surgery will be a very long one, followed by a hospital stay of at least a month.

Most of the talk was about what to expect after transplant, though. First of all, to prevent rejection of the new intestine, his immune system will be surpressed. Because of the risk of rejection and other complications, we’ll need to live close to the hospital so that he can have regular follow-up visits, including biopsies to check for rejection. He’ll be on immunosuppressants for the rest of his life, but in that first year, at least, his immune system will be incredibly weak. We’ll have to avoid public places as much as possible and avoid exposure to any kind of illness, bacteria, or other source of bugs that can cause him problems.. His diet will be limited, and at first he’ll probably still be on TPN as he learns to eat and eventually to get enough nutrition that way, but they’ll work to slowly wean him off of that. He’ll be at risk for a lot of big scary health problems, including rejection, infection, and a certain type of cancer that can develop when the immune system is supressed. Here’s more information about the risks and ramifications of life after transplant.

Our last scheduled appointment was with pre-anesthesiology, which was really a simple one, considering that Patrick’s had surgeries before. They we headed upstairs because they’d ordered a bunch of lab test. We pushed to have labs drawn through his broviac, but they still wanted us to ask at the lab for it to be drawn by just sticking a vein. They told us to ask for their best tech, which we did. He took one look at the list of tests and then at Patrick and said that he didn’t feel comfortable drawing that much blood from a kid this size, especially through a needle, when he has a broviac line. So, he took a little blood for some blood typing, gave us a bag to collect a urine sample and sent us on our way.

We were pretty overwhelmed that day and avoided giving updates because it was so much information to process ourselves. Instead, we went out to dinner and Patrick made our evening for us.

While we were eating, I looked over and noticed that Patrick was imitating my expressions while I ate. He was making chewing faces and licking his lips when I did. Then he started to blow bubbles and, well, I decided to blow bubbles back at him. The next thing we knew, he’d learned to blow raspberries and would happily spit back at us whenever we spit at him. It was a fun game to play for the rest of the evening and week, and definitely helped to lighten the load of a HUGE day. 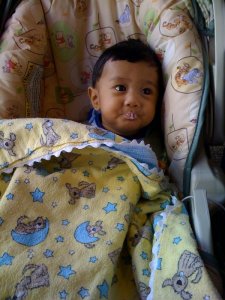