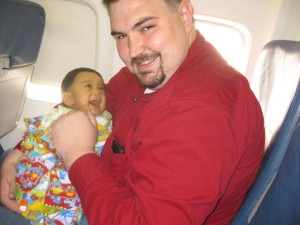 So the first big question about getting Patrick to Seattle was transportation. With current airport security, how do you get a kid who is connected to running IV fluids through security? And how do you go about transporting a week’s supply of TPN? It has to be kept at a certain temperature and, well, there is just a lot of it. Hauling a cooler and coordinating tubing through the airport just didn’t sound like much fun to us, but neither did dealing with any lost luggage.

So I did tons of research: called the TSA, read every page in the Delta website about baggage, and read websites written by other TPN patients. Finally, I asked the pharmacy if they could ship the TPN ahead of us. Turns out, that’s a free service that they provide. And our wonderful friends Lindy & Kelly helped us find a place in Seattle to ship to and then picked up the shipment and kept it in their fridge until we could get there.

So we were able to travel with just 2 day’s worth of medical supplies in our carryon… which was still enough to fill an entire carry-on sized suitcase, but probably saved us TONS of grief. Patrick’s luggage was by far the biggest and we were probably quite the sight making our way around with Howie hauling 3 rolling suitcases behind him and his carry-on and me with a stroller, a duffel bag, and a diaper bag.

We were surprised by how smoothly things went at security. In Salt Lake a TSA worker came up to us when she saw us getting our stuff ready to go through X-ray. I explained to her Patrick’s IV’s and showed her my suitcase full of medical equipment, including IV solutions and syringes full of saline and heparin. She took over right away. Patrick and I went through the metal detector and (of course) set it off because of his pumps. Then they took us to the little security station and ran their little tests on his medicines. When they were all done, they patted Patrick down and then did a wand/hand search of me. Then they thanked us for keeping things organized and making them easy and sent us on our way.

We were allowed to board the plane first because we were travelling with an infant, which was different but nice, especially since we needed to get his stuff settled so we could get to anything he needed during the flight.

We booked him a seat, not to sit in, but to give us some extra space. His backpack rode there buckled in and Patrick started the flight in his daddy’s arms. He played and he slept and he flashed his bright eyes and smile at the flight attendants and the passengers around us. He was by far the best behaved child on the flight! Whimpered only when he was hungry.

Finally we landed and took our crazy little caravan to the rental car company and checked in at our hotel. We took a much needed nap before heading over to visit Kelly and pick up the TPN shipment.

The day of travel was much smoother than I could have ever expected! Which turns out to be a good thing, as we had a very long week ahead of us