I apologize for the long lapse in posts. It’s all for very, very good reason. Friday, Brian came back into town. And we have kept ourselves busy all weekend with family time.

I can’t put into words how good it is to have our family all back together. Even if we are all in a pretty small room together. Getting in the car to drive to the airport to pick up my husband and best friend made me more than a little emotional. It’s only been 2 weeks, but it was a long 2 weeks for all of us.

Friday night’s dinner group went all out with a full Christmas dinner, decorations, bingo and prizes. It was not a bad welcome home party. Patrick had a hard time sleeping with the excitement of Daddy with him in he Ronald McDonald House the first time. (He doesn’t know Brian was here while he was in the hospital, so he kept trying to give Daddy the tour.) And it was also the first day with a change in Patrick’s feed schedule so I botched the feeding pump programming and schedule so it alarmed a few times during the night and none of us got a great night’s sleep.

Yesterday, we got up and Brian dived right in helping with Patrick’s medications. We’re used to a lot of medications and a lot of care but there are a lot of little intricacies that it takes time to get used to. Still, we got through all of it so much faster with extra hands working on it.

That was great, as we wanted to go to the store and Patrick is safest if we shop in the mornings while stores are uncrowded. We went to Target and picked up a few things we needed. Then, we got in the car to go. Only, it wouldn’t start because we’d accidentally left the lights on and the battery was dead.

So, deciding that we needed nice backup plan for me when I’m alone anyway, Brian went into the store and bought a car battery jumpstarter. We got the car started and then went for a nice long drive to charge the battery.

When we got back, we grabbed some lunch. Patrick has surprised us these last few days. He has gone from casually grazing on food to eating voraciously. Ok, well.. almost eating. He still spits out much more food than he swallows. Except soup. He’ll eat a cup of soup pretty easily. He is always asking if he can eat and asking for more at the end of a meal. I’m kind of excited to get him started in feeding therapy and see if we can get him the skills he needs to swallow his food. Because he sure does enjoy it right now.

Afternoon nap was much harder work than it should have been. Patrick is always tired but having a hard time sleeping here. When he did make it to sleep, though, he slept the next 2 hours.

We ended up waking him because we needed to get him ready for the evening’s plans.

Last week, a little before our anniversary, I talked to a friend from church and asked her if she’d consider making arrangements for someone to babysit Patrick here at the house so Brian and I could go on a date. She volunteered. I asked her if she could suggest any restaurants. She ended up going above and beyond. Not only did she give me the names of a few places, she e-mailed the nicest steakhouse in town and asked them if they had any coupons that might make them affordable.

Their reply was one of those humblingly generous things that we are having a hard time getting used to. Hearing our story, 801 Chophouse offered to give us a $100 gift card that would cover the cost of our entrees. I’ve eaten at a lot of very nice restaurants. This one definitely had the high-end feel down, though. I felt a bit young and naive as the waiter went through the menu options. 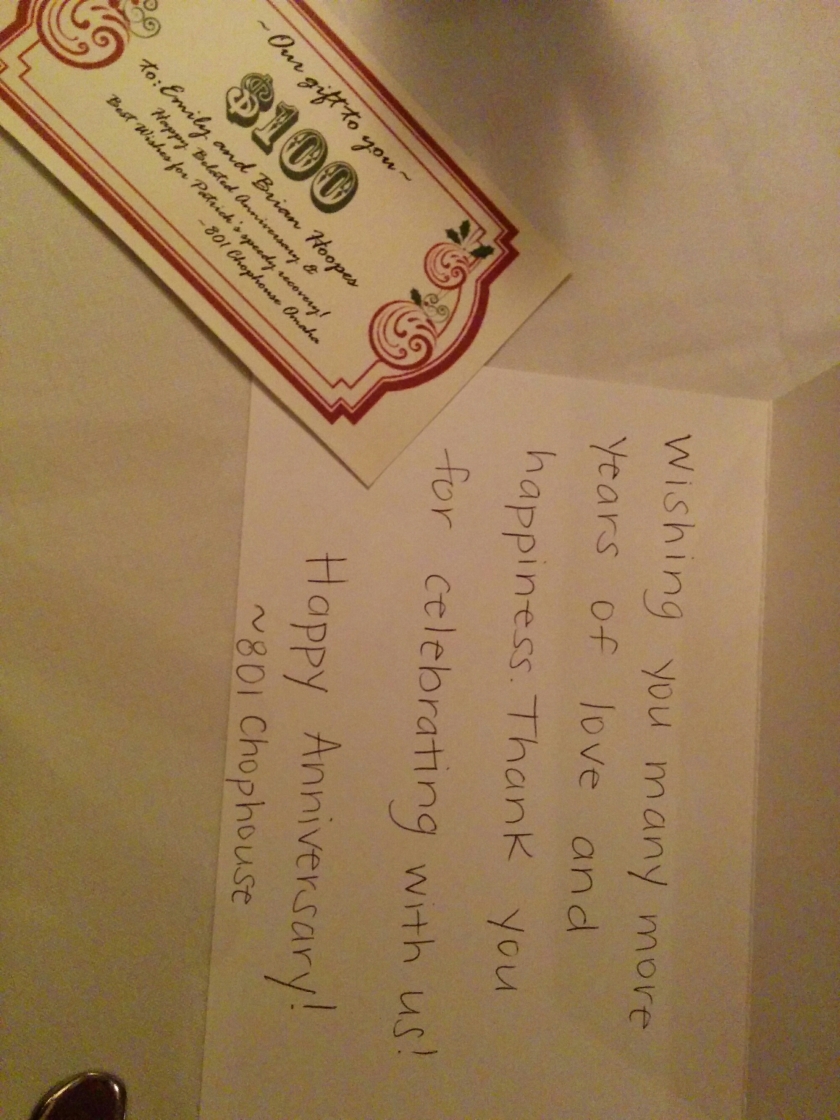 The meal was delicious, though. New York Strip in a bone marrow butter bath, aged cheddar hash brown potatoes, lobster macaroni and cheese, and some of the yummiest green beans I’ve ever seen with bacon that was as impressive as the steak.

They gave us extra special treatment because we were there celebrating an anniversary. The menus even had “Happy Anniversary” printed at the top. 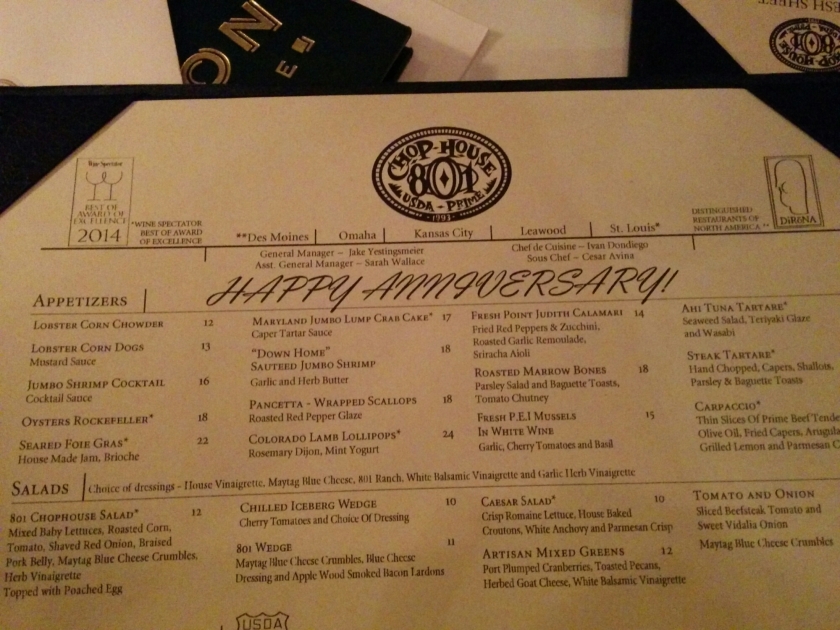 And the amazingly decadent chocolate souffle with chocolate, strawberry, and vanilla cream sauces on the side.. well they gave that to us as an anniversary gift. 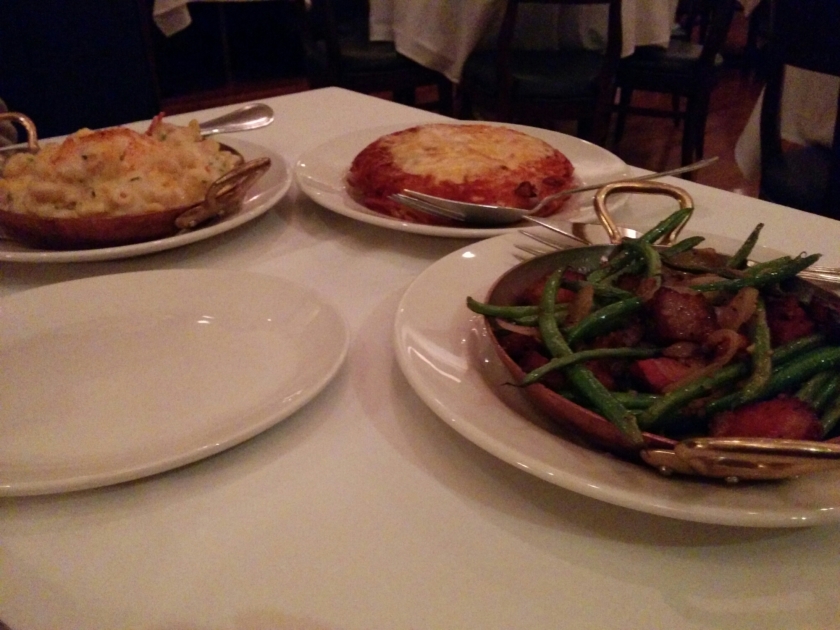 After dinner, Brian and I went for a walk around the area known as “Old Market.” There were Christmas lights lining a sort of park/waterway with bridges and pathways. A perfect atmosphere, if more than a little bit cold.

When we got back to the house, we found Patrick happily dining on ham and mashed potatoes. We said goodbye to my friend and her friend who’d come to help and then sat down to do crafts.

Today’s been a mostly quiet Sabbath. I got to go to church while Brian and Patrick stayed back at the house and played and did some work. Once I got back, we went back to the Mormon Trail Center to see the gingerbread houses together. Patrick was calmer this time. (Medication right? Previous experience visiting?) Anyway – this made it much easier to admire the gingerbread houses this time around. And when we got upstairs, he headed right for his favorite kid-friendly activities like dress ups. 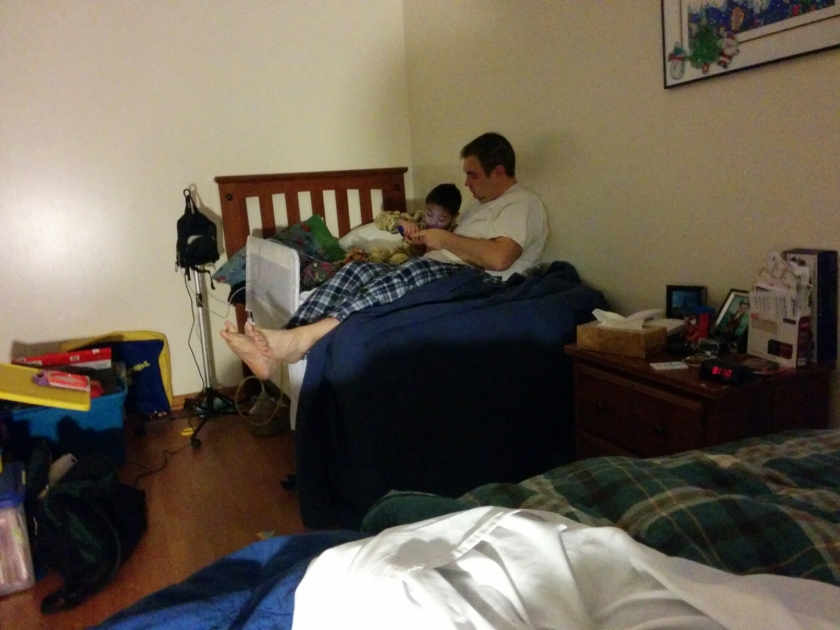 Patrick is eating up daddy time. I kind of feel bad because that’s about all Brian has had a chance to do. They cuddle together and watch TV or play on their cell phones. Meanwhile, I got to play the piano and make frosting for gingerbread houses.

Patrick didn’t last long at that activity tonight, but he had fun doing it and I’m glad that Wendy went to the trouble to get all the ingredients and put things together. I think everyone is enjoying it.

We’re just about to eat dinner. Last night’s dinner group saw me preparing leftovers from a turkey carcass to be turned into soup.. So they made homemade egg noodles and turned their leftovers into soup for us today instead. That’s what we’ll be eating. Then we’re hoping that not giving Patrick a nap has made him tired enough to go to bed on time.