Well as the week goes on, I feel bad for feeling so crazed and out of control our first couple of days here. We are establishing a routine and I am finding myself with plenty of time to kill these days. At least the days go quickly.

Yesterday morning started with labs. On the weekend, they have to be drawn at 8:30 but submitted by 9 or the results won’t be back. So we were up and ready early.  The lab draw was done early, though, so we quickly made it downstairs.

In the morning, Patrick has meds at 9. Two of these are stored on a fridge on the first floor so I draw up the room temperature ones in our room then we finish downstairs. Patrick gets borer and wanders off. This time, I brought a little game with me and it went better than usual.

Then, we wash the containers his formula is mixed in and make a new batch for the day. Patrick likes helping me shake the soap in the mixing bottles.

Next, we grab it dirty laundry and poor in a batch. Patrick plays and I get some free time. I had a to do list on my computer but it wasn’t coming yesterday. So I switched over to playing the piano. That created a bit of a sitter in the house and made me wish I had had Brian pack more music.

Patrick wasn’t very happy with me though for directing him to play alone when he was bored. And he got more and more naughty as time wore on.

Finality, we got to our room and he was both dysregulated (out of control of his sensory processing) and feeling pretty disobedient. We ended up sorting down and drawing some house rules. Doors and drawers stay the way we found them. Don’t play with light switches. Leave the wheeled garbage can in its place. Only scam the spot let card I’ve each time we use it. Stay by mom. Listen and obey the first time.

We free and hunt up these rules and I granted a bunch of stickers to praise him when he kept them. I also cut a “stop” cue or if craft foam and told him that any time I showed it and he stopped what he was doing to come to me, he could have more stickers.  The rest of the day wasn’t perfectly smooth, but we both were trying harder and it worked a little better.

The weather is still warm. Mid 50’s. So I grabbed us sweaters and we tried going to the park again. But we were barely out of the car when Patrick was shivering and asking to go. Guess I underestimated his body mass. So we came back to the house and took a nap instead.

Then, it was time to start dinner. A few days ago one of the other bonds and I were talking about cooking. There are a lit of Hispanic families in the house right now. I mentioned that I learned to make tingavas a missionary and love it. And somehow decided I should make it on the next day we didn’t have a dinner group.

That was yesterday. I bought some ingredients the day before, but don’t dare take Patrick in a store on Saturday because of immune suppression. So we made a shipping list and a few other moms divided up the rest.

We spent yesterday evening cooking. I made things. Violeta made rice. Miriam made salsa. Wendy did the veggies and chased Patrick.  We made enough to share and so helped feed 4 other families. They all offered to help pay for it, too, but we have been given some generous gifts this week and it felt good to share. Instead, they helped with cleanup.

Dinner was yummy. It was so nice to have some normal.. To cook and visit and let Patrick play without me nagging him over rules. To eat something different. 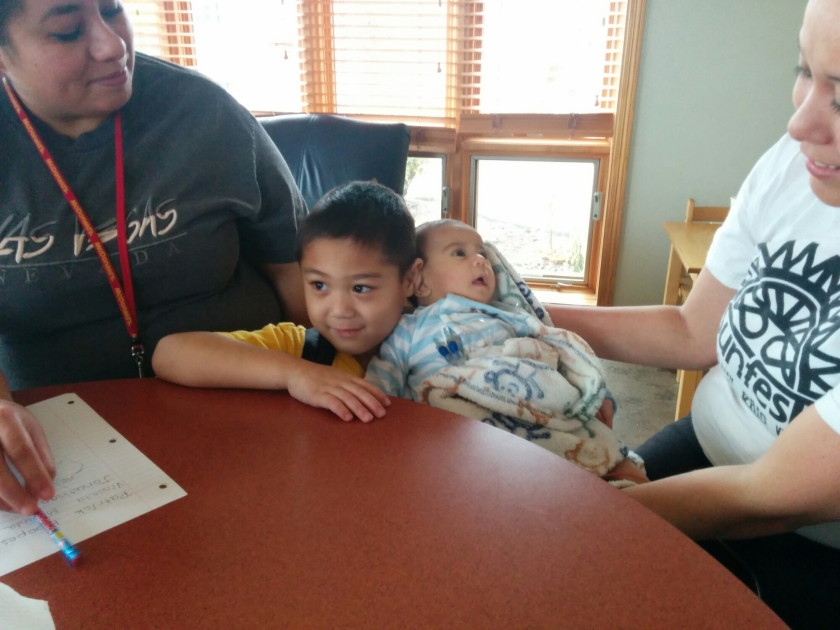 After a few hours running around playing, Patrick stated to complain that it was hard to walk. His cerebral palsy has between especially pronounced odd late. His muscles atrophied while he was in bed and as we work to rebuild them, the spasticity in his leg and hip is coming back strong. I am having him wear his brace most of the day, but his hip still turns. And so by dinner, he was so tired he was falling because he was paying and walking and climbing stairs and made those weak muscles tired.

After dinner, I turned on blues clues in or room and finally convinced him he could stay and rest and watch while I ran around. So he sat in the bed and watched TV while I got meds and formula for the evening.

We went to bed on time, but chatted with Brian before sleeping.  That made Patrick excited. At 11 I declared I was too sleepy and needed to go to my bed. I think he fell asleep about the time I did.

And now you get a post because I had a bad dream and need to be up to refill formula here soon so I figured it was a good time to write.

I took these pictures two days ago at the park. Just haven’t been able to get them to upload till today.