Boy I didn’t mean to leave you all in a cliffhanger there. May turned out to be a rough month for us. Patrick was hospitalized twice with fevers and Brian & I have been sick, too… Blogging is one of the first things to go when things get hectic in our family. I’ll blog more about our first experiences inpatient at Primary Children’s… But I left you all hanging with the story of our first inpatient experience at Seattle Children’s.

So here goes…After Patrick’s GI sprung on us the idea of admitting him to the hospital for labwork and a transfusion, we made a few calls to make sure it was approved by the insurance company, and then the transplant coordinator took us to the admitting desk. 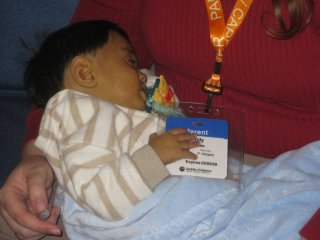 We traded in our clinic “Parent” badges for inpatient badges on lanyards that allowed us to wander around the hospital anytime day or night. Someone from admitting met us and led us over to what would be our room for the night. A nurse came in and started to take Patrick’s history. When I handed her my printed medical fact sheet, we got instant brownie points. She took the first vitals and got us settled in the room, but then her shift ended. This is the problem we’ve witnessed a few times… Things move slower if you arrive at shift change because there’s so much else going on.Around 7:30 things finally started to progress. Because we hadn’t been planning on spending the night, there were a few medical procedures that we would have done in the hotel room that we found ourselves having to ask permission for, and even supplies for… But they finally got it all done. We met the doctor and made a tentative plan for labs to be drawn once the blood for the transfusion had arrived. The IV nurse came and took some labs for blood typing and left a peripheral IV in Patrick’s foot that they’d be able to give the transfusion through.

Around 9 things finally settled down enough for us to order some Chinese takeout. (The only restaurant open that would still deliver to the hospital at that time of night)… and after it arrived, Howie went back to the hotel room and brought back the things we’d need for the night.Our room was in the surgical unit and was really quite nice. It was a shared room but Patrick was the only patient overnight. It had a nice couch that folded down into a bed, a bathroom in the room, and a window with a pretty nice view. When it wasn’t cloudy, you could see the space needle.

Things went pretty smoothly overnight. Patrick had a really great nurse who was impressively quiet. I woke up when the blood arrived for the transfusion so that I could take care of the TPN (they allowed us to run our home pumps, providing we were always available to operate them).

The next morning they wanted to do a floroscope (contrast X-ray) of his intestines. This was to be done in two parts so they could see the top and the bottom separately. They showed up early for the first one and took us to radiology where they took a chest x-ray and then strapped him to a board on the floroscope table. The board restrained his arms, legs, and head and also allowed the radiologist to tip and turn him.

Patrick didn’t like this at all, but they let Brian and I be close to comfort him (Brian was actually in charge of protecting his head when they turned the board) and Patrick eventually fell asleep during the test

They put a contrast solution in through his g-tube and took images showing it move through the stomach and out his stoma. It was interesting to watch it move through and appear on the screen.Then we were supposed to wait and see how long it took for the contrast to clear so they could see his large intestine without the small.

I was sleepy, hungry (they showed up before I could get breakfast) and frustrated at my plans for a mini-vacation being postponed. When the radiologist hinted that they might keep Patrick another night for the next floroscope to be done, that pushed me over the edge a bit… So Brian sent me to get breakfast straight from radiology and went with Patrick back to the room.

When I got back, he informed me that we’d missed rounds… fortunately we didn’t miss his GI, who came in just a few minutes after I did. He promised that they wouldn’t keep us another night, did a quick exam of Patrick, and then left.

Brian had a business lunch he’d scheduled so I stayed in the room and tried to get some sleep… Unfortunately, we got a roommate whose alarms were going off regularly and that was a mostly vain effort. The rest of the day was waiting and more waiting to see if the contrast would clear out of Patrick’s system… When it still hadn’t by 3 p.m. they finally started to work on a discharge plan. We’d come back outpatient the next day for the next test before our flight.

We finally made it out of there sometime in the late afternoon and snuck a nap in before finally getting out to play a bit.

Our friends Lindy & Kelly took us out for some authentic Italian pizza and then for Seattle’s famous Royal cupcakes. It was good to get to visit and spend some time with them. I was impressed by Lindy’s cunning as she excused herself to go to the bathroom and really went and paid both halves of the bill.

Our last morning in Seattle we got up and went to the hospital for the last time. The radiology tech from the day before was there yet again and very excited to see our names on the schedule. I asked if we could take pictures of Patrick on the table for this test and before you knew it, they’d convinced us to pose for this picture, which seems so wrong to be smiling in, but gives you an idea of what room, equipment, and our lovely lead vests were like.

Turned out to be really good we were there because I’d seen previous tests and knew that what first appeared on the screen was not the full length of large intestine and could encourage the radiologist to inject more contrast until we saw the rest. Because this organ isn’t used, it is rather narrow.

We made it away with just enough time to meet Lindy and Lauren and enjoy a nice walk in the park and a delightful lunch before rushing off to catch our plane. Obviously, it wore the kids out.

Security in Seattle didn’t go quite as smoothly as Salt Lake… I think this is because the first person who I was able to tell about Patrick’s pumps was the security agent at the metal detector who I think mistook the backpack with tubes coming out as something scary. We quickly got things sorted out, though, and they didn’t have other problems with the extra search.Patrick and his daddy slept through pretty much the entire flight and we got home without incident… But with very full mind from everything we’d learned and a much better sense of just what a big deal this all really is.

If I can manage a few more days of health in this house, I’ll post a bit more about how much this one little trip and the plan for transplant affects and will continue to affect our little family.