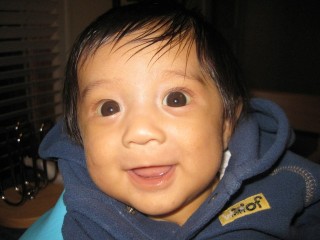 Patrick is 3 months old now and is starting to look and act much more like a little boy than just a baby. Oh sure he still wakes us up at night. And I can still tuck him under my arm and carry him around like he weighs nothing (of course, he’s still very small). But he’s growing (8 lbs 13 oz) reaching that fun stage my family calls “interactive baby”.

First of all, he’s started to give out smiles all the more willingly. I can bet on the fact that I’ll get a big grin whenever he wakes up and realizes I’m holding him. This past week, he’s also started to react more when I play with him. He’ll laugh and talk when I sing him songs or talk to him, and I can get him outright chuckling if I pretend to eat his cheek or tummy. He also is starting to take an interest in peek-a-boo. Of course, this is all the more incentive for me to sit and do nothing for hours besides just trying to get smiles from Patrick.

He’s taken a new interest in his toys. He loves to sit in the bumbo seat that Howie’s co-workers gave him. He’s actually learning to hold things so his gym, rattle, rings, etc. are suddenly much more interesting.

Course, he’s also learned to hold onto his central line… which is a bit more of a problem. Don’t need him grabbing that and giving it a yank. Thankfully, my mother in law modified a bunch of onesies to a design I came up with that send the line out the side instead of being right in Patrick’s reach and those are helping.He’s sleeping through more of the night and spending more of his days awake. Part of this may be that he’s finally feeling better. (His anemia is resolving himself and we are starting to get a hold on keeping him hydrated again). But I think part is just that he’s growing up. 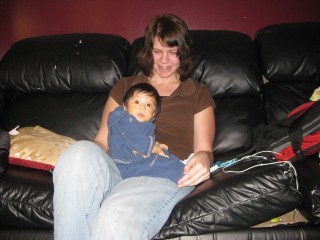 Daddy went on his first business trip since Patrick came home this week. Thanks to all the friends and family who were there to watch over us, we made it through just fine. And now that Howie’s home, Patrick is just eating up the daddy time. 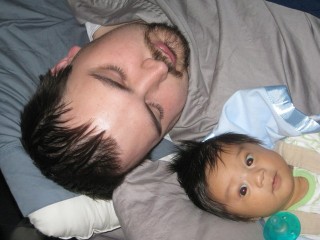 Perhaps the best news is that it was all pretty good news when we went to see Patrick’s gastroenterologist this week. If you don’t know, the past couple of weeks have been a bit scary as we almost had to take Patrick to the ER a couple of times. First, we suspected he might be developing a fever. Second, out of nowhere his stool output went through the roof and he walked a line with dehydration that we had to watch VERY closely. (Patrick doesn’t have the portion of intestine that reabsorbs fluids, so diarrhea will dehydrate him much faster than other children).

As so often has happened for us, though, the Lord was watching over Patrick. The right doctors were on call at the right times and they were able to teach us how to take care of things at home rather than taking Patrick into the ER. We had blood cultures drawn by his home nurse. He was put on an oral antibiotic to help fight any bacterial overgrowth that might be there. (With so little intestine, Patrick’s body can’t get rid of the “beneficial bacteria” that live there the way the rest of us can and he can get infections in his intestines that could cause diarrhea or worse.) He had his 2 month (yes, I know it was late) checkup with his pediatrician on just the right day so they could do labs to check for other stomach bugs.

And, in the end, the great news is that there is no sign of anything malicious that’s causing the change in output. We monitored him closely and gave IV replacement fluids at home so he wouldn’t get dehydrated. He got pedialyte instead of formula, and then watered down formula for about a week and a half. This week we were finally able to start giving him full strength formula in very small amounts (about a third of what he was getting, before… he’s up to a teaspoon now). And so far, so good. In fact, we’re on the other side of things right now where he’s not losing enough fluids… a sign that we need to increase his feeds. (We want him to need some replacement fluids because that’s where he gets his electrolytes).

So – if our emergency watch level were on the same scale as homeland security, we’ve backed down from red (severe) to blue (guarded). I’m getting to spend more time being mommy and less time being nurse.

I’m so grateful that Heavenly Father answers prayers. And I’m grateful for priesthood power in our home. Brian is an elder in our church and was able to give Patrick a blessing of healing this week. And really, the fact that Patrick is still home with us, and feeling happy and healthy, is nothing short of miraculous. 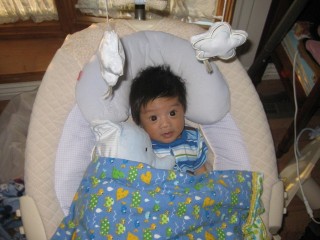 Speaking of miraculous, (as this blog post reaches an eternity in length), just a reminder that Patrick will be sealed to us in the Jordan River LDS Temple on February 13th and we’ll be having an open house to welcome him into the family that same day. Any of you who are in the area and would like to celebrate with us are invited. For those who are out of town, we’ll try to be quick in posting pictures, thoughts, and memories so you can share in the day with us.